“Awake! arise! the hour is late!
Angels are knocking at thy door!
They are in haste and cannot wait,
And once departed come no more.
Awake! arise! the athlete’s arm
Loses its strength by too much rest;
The fallow land, the untilled farm
Produces only weeds at best.”
― Henry Wadsworth Longfellow

New farmers often don’t recognize the importance of weed management, or, in the case of many young sustainably minded farmers, think that “they are natural and therefore we should let them simply grow”.  The truth is that weeds can make or break a new farm especially one that has decided not to use herbicides for crop protection.  Anyone who has had to battle Canada thistle–even in a small garden patch–knows how much time and energy it can take to deal with it.  Conversely, a clean weed free stand can yield bounties.

Understanding a bit about weeds, identification, biology, and reproduction can go a long way in implementing a smart, environmentally sound weed management plan.

What is a weed?

A weed is simply a plant that is out of place.  The dictionary defines it as “a valueless plant growing wild, especially one that grows on cultivated ground to the exclusion or injury of the desired crop.”  Who decides if a plant is out of place? People.  Thus, what determines a weed or not is a bit subjective and certainly anthropocentric, nevertheless, managing and controlling weeds is an essential task for the would be farmer.

The Kenyon Farm has, unfortunately, become engulfed in opportunistic weeds: mare’s tale, dock, thistle, golden road, quack grass, cheat grass, giant ragweed, and pigweed among others.  They are particularly bad around the fence line where they have found a safe place from the mower and a well built trellis to boot.

Summer 2016 at the farm.  Hard to grow crops in coditions like these!

Weeds along fence line–difficult to move and ultimately threaten the longevity of the fence.  We choose to use a string weed eater to mechanically remove these weeds.

Weeds prior to mowing.  Notice the thistle infestation–often usually a single thistle can produce a large number of above ground “plants” which are infact one individual with a vast network of rhizomes.  Mowing alone won’t eradicate this weed! 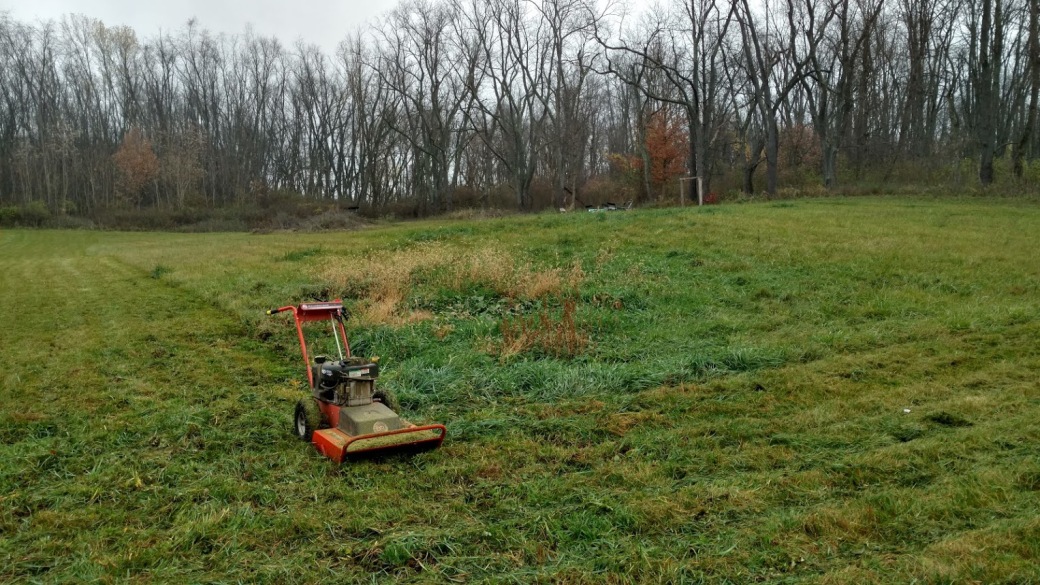 At this time the farm’s only mowing equipment is a walk-behind DR Field and Brush Mower.  While it’s a fairly robust 10.5 HP piece of equipment for a walk behind, it’s a bit on the inefficient side.  Then again walking is a enjoyable and healthy activity. 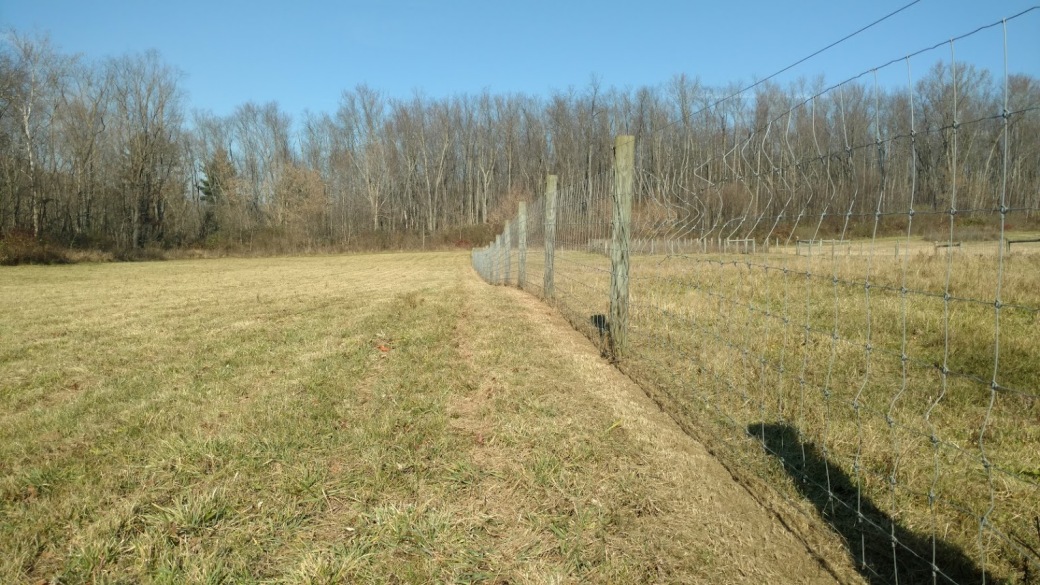 Field after mowing and weed eating around fence lines.  Yes, the fence does need a bit of mending…

Sun going down on the farm.  Time to rest and settle in for the winter!

One of the biggest distinction between weeds are annuals versus perennials.  Annuals, such as lambsquarter, black medic, purselane and spurge, invest their photosynthetic earnings in seeds which are dispersed to create a new generation of offspring each year while perennials, such as nutsedge, ground ivy, and buckhorn plantain, use their energy to spread and store energy in their root systems so they can overwinter and return the following warm season.

Some weeds are highly noxious while others are rather innocuous.  Purple dead nettle and white clover for instance don’t pose too much risk and infact may actually provide some benefit in the way of biomass and, in the case of clover, some nitorgen input.  Mile-a-minute vine and canada thistle, on the other hand, are horribly difficult to eradicate and can greatly diminish productivity if allowed to spread unabated.

A “Weed Seed Bank” is a way of thinking about the seeds and other vegetative propagules (e.g. rhizomes, tubers, and bulbs) that are present in the soil.  Deposit are made when weed seeds uncontrolled and allowed to reproduce.  Withdrawls are made when seeds and other propagules are eliminated.  Unfortunately making a withdrawal is a lot more difficult than making a deposit.

A single lambsquarter plant can produce 30,000 to 500,000 seeds.  Most of the seeds will probably not lead to a viable plant–many will be consumed, decompose, or simply not find a viable place to germinate.  For the sake of argument, consider what would happen if only 0.1% do germinate and go on to produce a viable seedling, we would be looking at 30-500 plants the following season from one individual plant!  And because lambquarters can survive for up to 40 years, the seeds can build up in the soil waiting until the conditions for germination are right.

One study in Nebraska found that 5 years of intensive weed control decreased the weed seed bank by 5%, but a single year without proper weed control led to a 90% increase.  Wow!  That’s why preventing deposits is the real key!

Common Weeds around the Farm

Canada thistle (Cirsium arvense): an herbacious creeping perennial that can be accidentally spread through tillage as their roots (or rhizomes) easily bud from nodes even when chopped into rather fine pieces.  Oregon State University recommends tilling every three weeks for the entire growing season (or if using herbicides to spray clopyralid [trade names Stinger or Lontrel] shortly after emergence).

Marestail (Erigeron canadensis): also known as horseweed, an annual with sleder leaves resembling a horse’s tail (hence the common name).  In Ohio, this is considered a noxious weed as it has developed a tolerance to herbicides containing the active ingridient glyphosate (aka roundup). 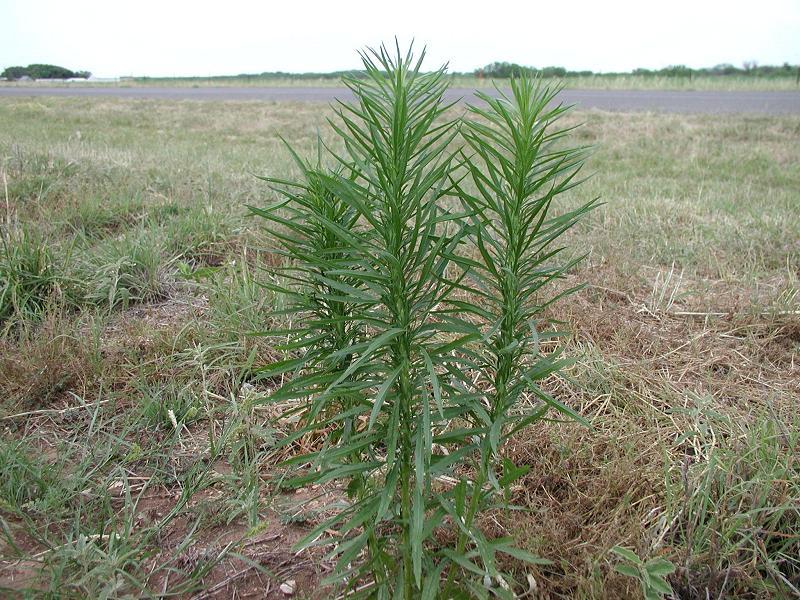 Pigweed (Amaranthus palmeri): several different varieties of pigweed or amaranth including Palmer amaranth, waterhemp and redroot pigweed are problematic in Ohio.  Like marestale, Palmer amarthan has developed a resistence to glyphosate and is spreading (mainly in soybean fields in Southern Ohio) across Ohio.  Ohio State University fact sheet on identifying pigweed. 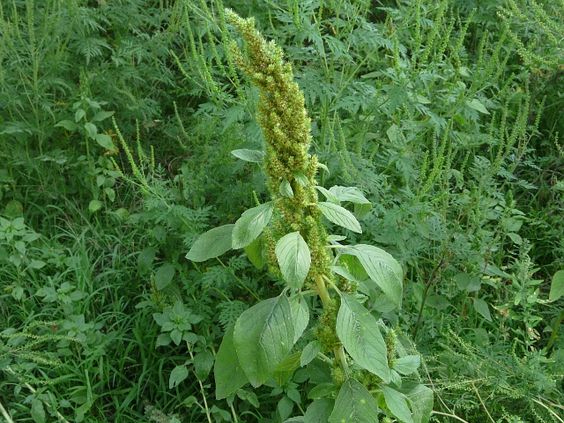 Quackgrass (Elymus repens): Also known as couch grass, a perennial grass with creeping rhizomes that allows it to spread quickly across fields and passtures.  According to OSU, a “single quackgrass rhizome node can produce 14 rhizomes with a total length of 458 feet in one year.”

Weeds of the Northeast by Richard Uva, Joseph Neal and Joseph DiTomaso

The Kenyon Farm is part of the Office of Green Initiatives at Kenyon College which also includes the Brown Family Environmental Center or BFEC at Kenyon College, the Kokosing Nature Preserve (KNP), and Philander Chase Conservancy.